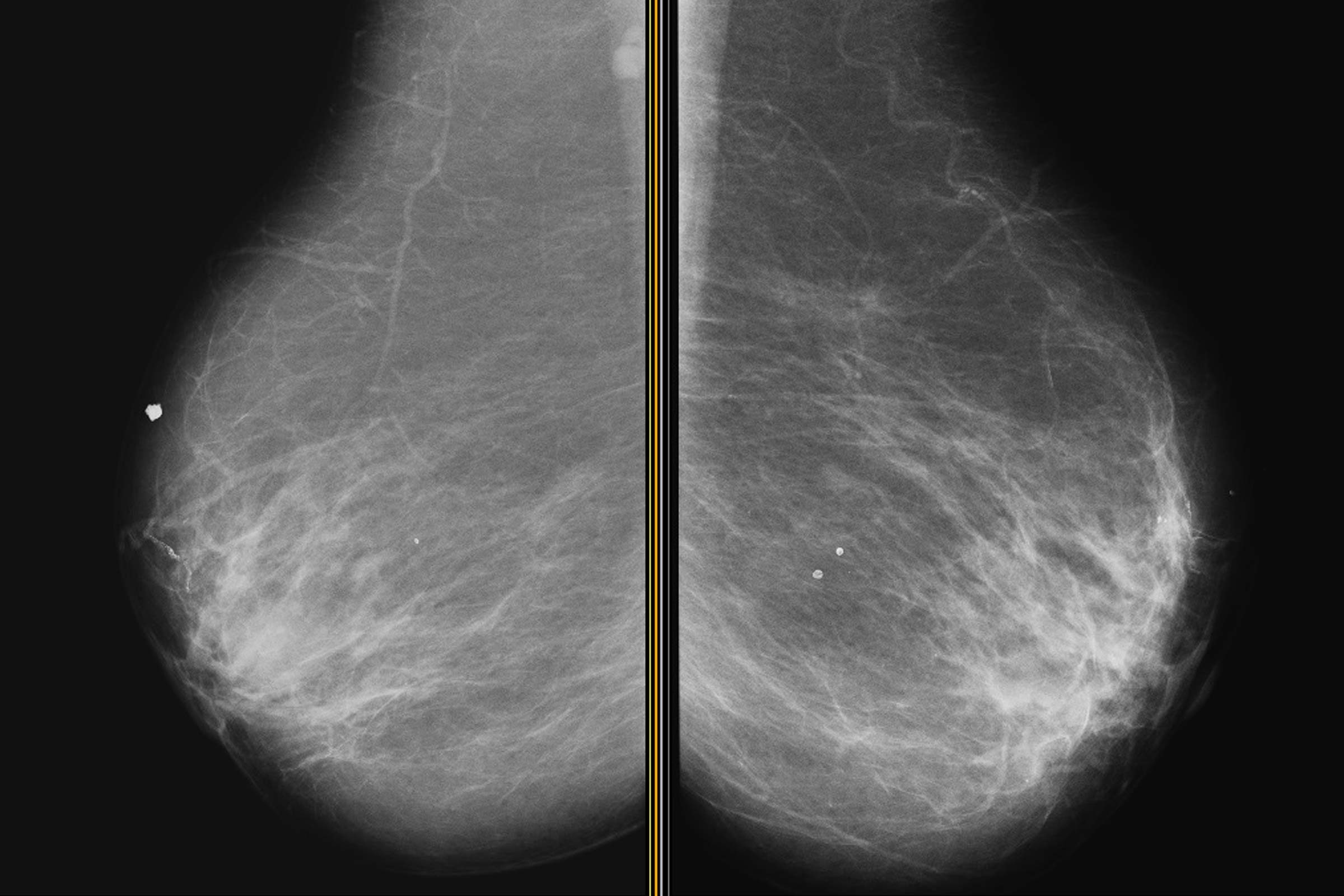 Breast cancer is second only to lung cancer as a cause of cancer death in women. Diagnosis of breast cancer and population screening (since the late 80’s) are generally done by X-ray mammography, possibly in conjunction with ultrasound. However, the X-rays are acquired at low voltage, leading to a high radiation dose (soft X-ray photons are less likely to pass the tissue).

In 2005, prof. Frans Gerritsen, part-time professor for Philips Healthcare in my BMIA group, approached us if we could assist in investigating the role of dynamic MRI imaging of the breast.

the central PhD ​student. She spent 6 months in 2007 at the University of Chicago, Chicago, USA.

joined us as a Senior Research Scientist in cooperation with Philips Medical Systems, Best, NL

joined as a BME MSc student. His MSc thesis  work greatly contributed to the project.

led the activities at Philips Healthcare at Best.

It turns out that, after an injection of contrast medium in the blood stream of the patient, the wash-out of this contrast medium is faster in the leaky angiogenic vasculature. This can be measured with s small series of MRI images at three or four time points:

As always, we formulated a number of key questions to be addressed: 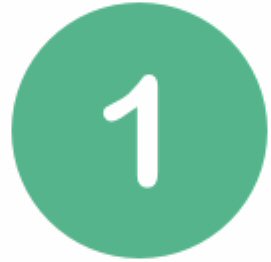 Can we model this washout process, to better understand it? 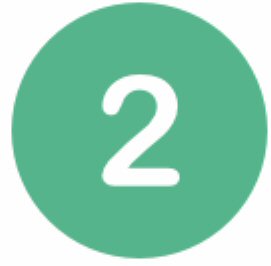 What is the best model? 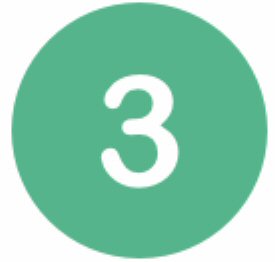 Low temporal resolution is easier in the clinic: what is the best imaging speed: fast or slow? 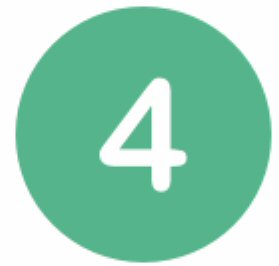 How is the MRI intensity related to the contrast medium concentration? 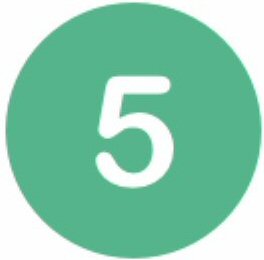 How does the method perform in practice?

is the common way to model the flow of contrast medium between two compartments. This is known as the extended Tofts-Kety model [Tofts 1999].

There is a higher uptake of contrast agent in tissue with high perfusion and high vessel wall permeability.
The final curve assessment is done by applying shape models, e.g. a three-time-point model. 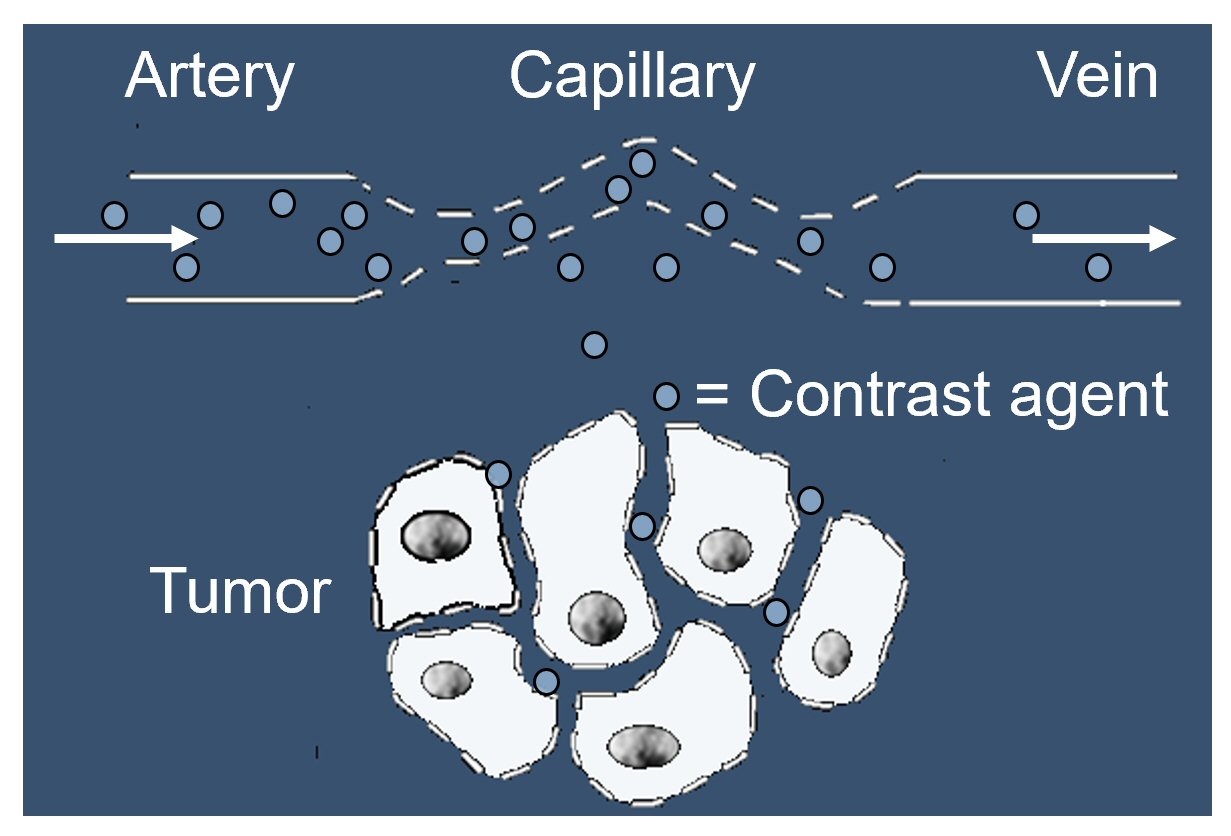 We investigated a total of four models:

The model evaluation and selection was done by Geert Litjens in his MSc project and thesis: We decided on the standard Tofts model.

3. Trade-off between spatial and temporal resolution

Low temporal resolution is easier in the clinic: what is the best model: fast or slow?
This was studied in a rat model at the University of Chicago.

Abstract from the paper:
We investigated the influence of the temporal resolution of dynamic contrast-enhanced MRI data on pharmacokinetic parameter estimation. Dynamic Gd-DTPA (Gadolinium-diethylene triamine pentaacetic acid) enhanced MRI data of implanted prostate tumors on rat hind limb were acquired at 4.7 T, with a temporal resolution of ∼5 sec. The data were subsequently downsampled to temporal resolutions in the range of 15 sec to 85 sec, using a strategy that involves a recombination of k-space data. A basic two-compartment model was fit to the contrast agent uptake curves. The results demonstrated that as temporal resolution decreases, the volume transfer constant (K-trans) is progressively underestimated (∼4% to ∼25%), and the fractional extravascular extracellular space (ve) is progressively overestimated (∼1% to ∼10%). The proposed downsampling strategy simulates the influence of temporal resolution more realistically than simply downsampling by removing samples. 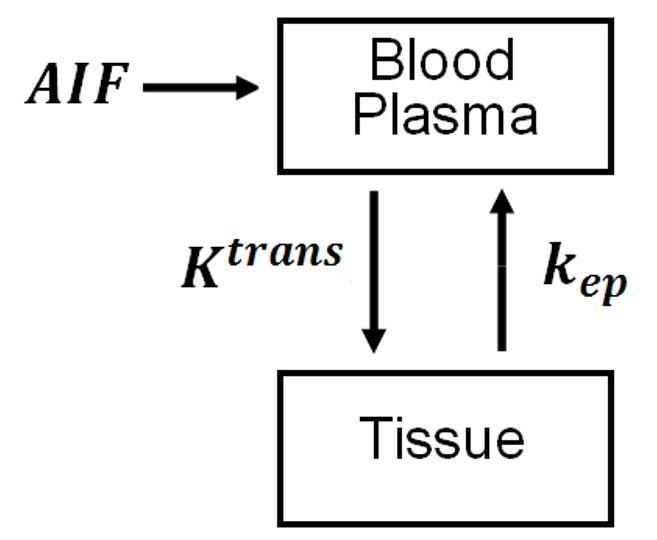 It turned out that, if we could measure the Arterial Input Function (AIF) accurately, the low teporal resolution sampling could be used with minimal errors.
The AIF is the pulse shape of the concentration of the contrast medium, just after the injection. The injection should be as short as possible.

4: How is the MRI intensity related to the contrast medium concentration?

In Chicago, at the Magnetic Resonance Imaging and Spectroscopy Laboratory, Department of Radiology, University of Chicago, Marieke worked with the local team, led by Greg Karczmar (physicist) to develop a unique air bubble free agar phantom to standardize and calibrate dynamic contrast-enhanced breast MRI.
The relation between MRI intensity and contrast medium concentration could be precisely quantified. 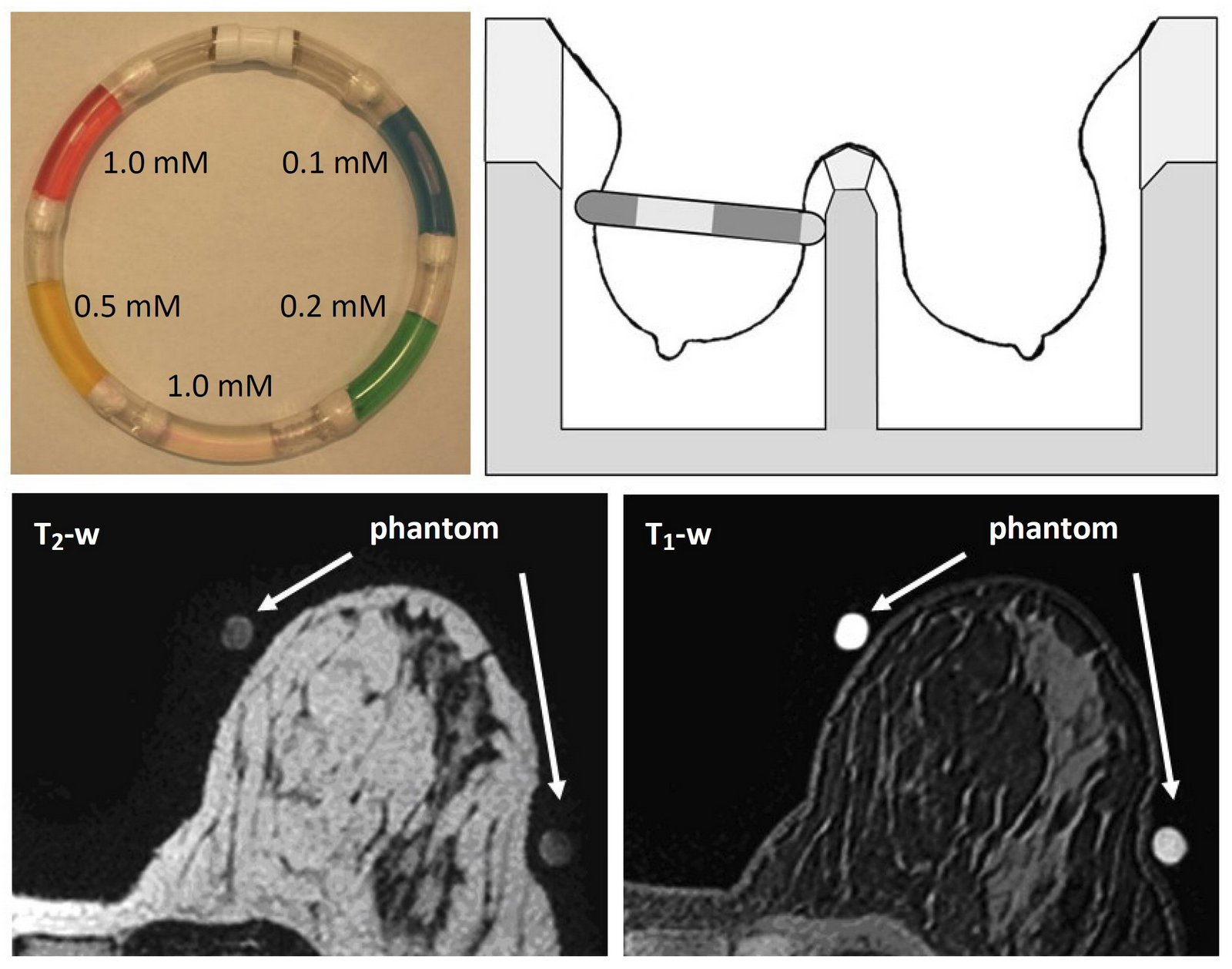 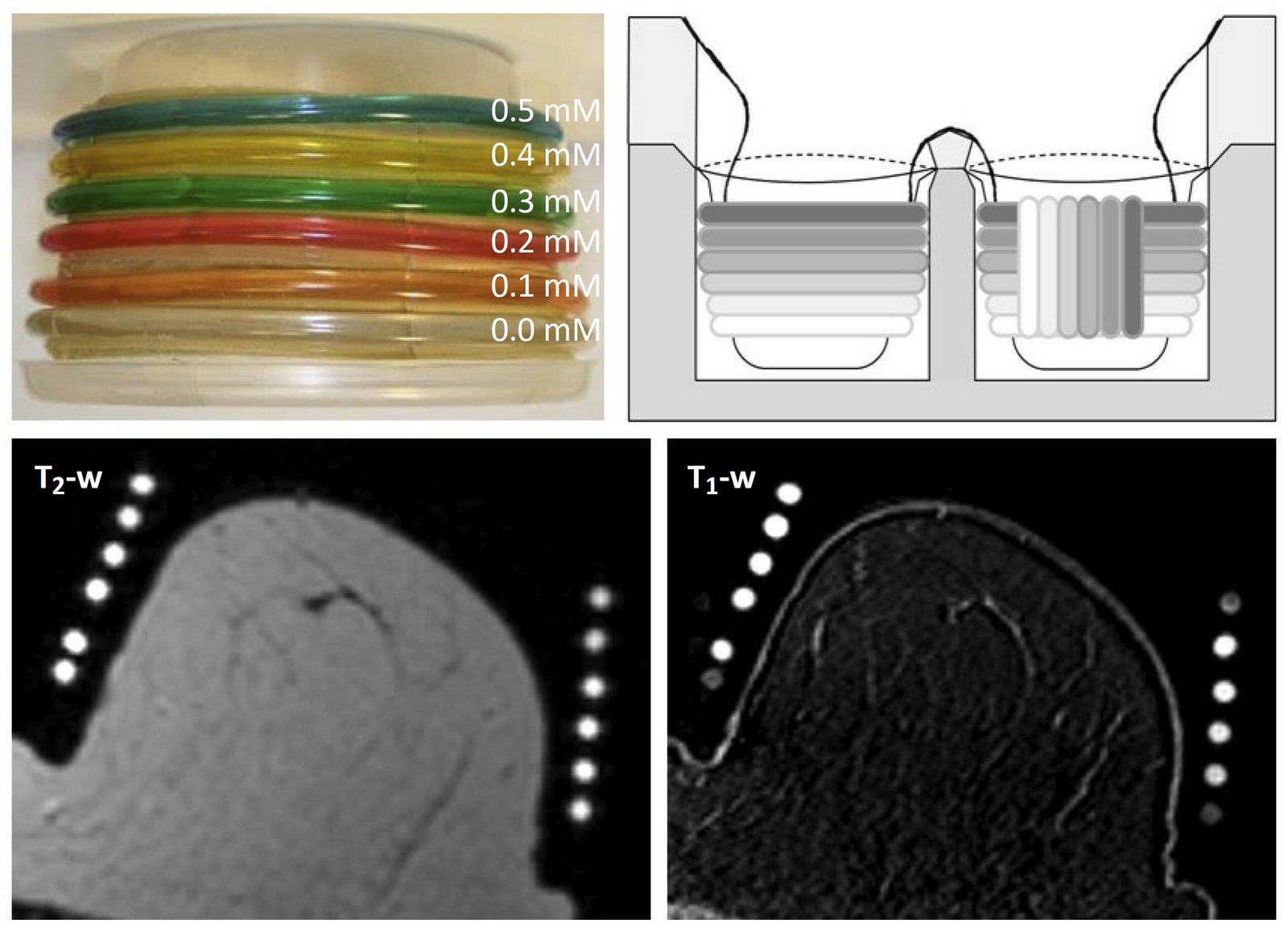 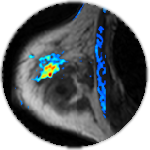 5. How does the method perform in practice? 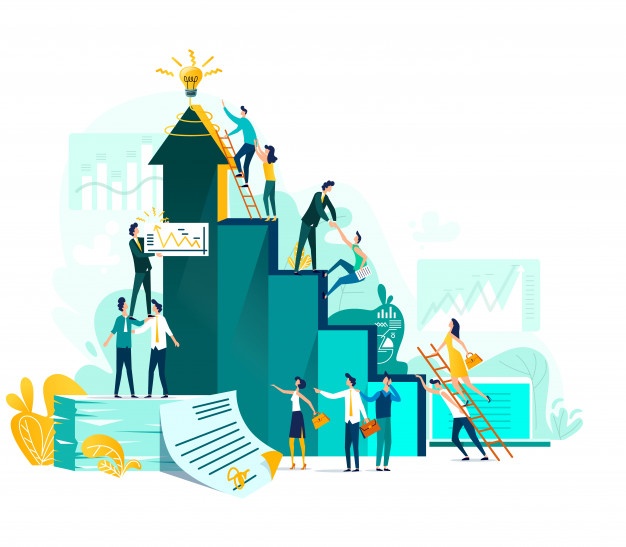 Publications from this project